Reconstruction issued on 30th anniversary of discovery made after major storm. 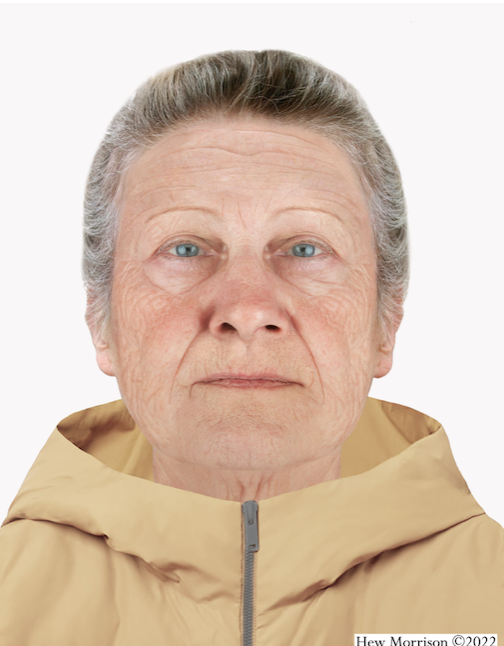 [January 2023] Thirty years to the day after the body of a woman was found at a scenic spot in Somerset, a new image is being released to help identify her at last.

The woman was found on the beach at Burnham-on-Sea on Wednesday, 13 January 1993, by an off-duty coastguard. She was found near the Low Lighthouse, and is not believed to have been in the sea for very long. It was shortly after the fierce Braer Storm – one of the most intense north Atlantic cyclones ever recorded – struck the UK.

Despite a number of clues on her person, Burnham-on-Sea Woman has still not been identified.

Now, on the 30th anniversary of the discovery of her body, a new image has been produced by Scotland-based forensic artist Hew Morrison to help try and identify her. This comes as a unit of volunteer investigators with Locate International is revisiting her case.

She was wearing a light green and beige overcoat with a dark green fur lined hood, dark ankle socks, and a knee-length black skirt with a ‘Jaeger’ label. She had one shoe from Stead & Simpson, described as blue with a blue bow and a 1.5” heel and was also wearing black, knitted gloves and a yellow and black patterned scarf. She was also wearing three cardigans, described as:

She was also carrying a packet of paracetamol tablets purchased from Superdrug and an ‘After Curry’ mint with the word ‘Kansaras’ on it.

The area around Bristol and north Somerset suffered intense weather at around the period she entered the sea. On 12 January 1993, thunder was widespread in the Bristol Channel area, a tornado struck Congresbury, Yatton saw hailstones up to 10mm in size, while streets in Weston-super-Mare were reported to be white with hailstones.

“As we reach 30 years since her death, we’re hoping someone out there can help unite Burnham-on-Sea woman with her real name. Maybe you recognise her, or her clothes, or served her the Kansaras after-dinner mint, maybe in a curry house. Maybe you remember a woman with very long grey hair in north Somerset around this time?

“We’re also looking into a possible link with the eastern European community in the West Country: did you know anyone with eastern European links at the time who matches her description? Even the smallest details can help move our investigation forward, so we encourage you to come forward.”

If you have any information, please contact Locate International by emailing appeals@locate.international, by calling 0300 102 1011 or by visiting our dedicated appeal page.