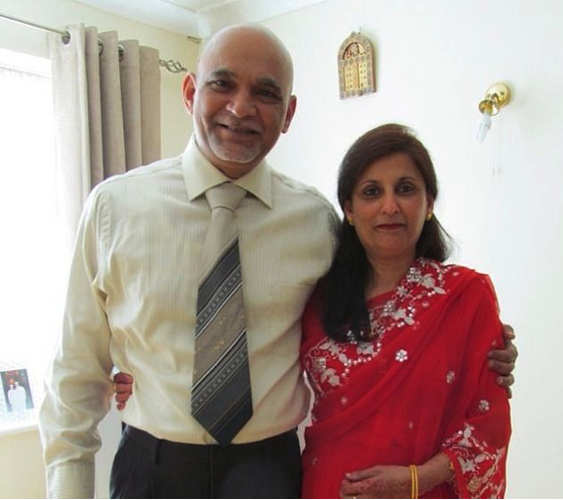 On 12th February 2016, Fatima awoke and saw her husband off to work at 7:30 from their home in Newhaven. Everything seemed fine and Fatima had her day planned to do her prayers at home. 15 minutes later, however, she was captured on CCTV briskly walking away from her home, with all her necessary possessions left behind. The investigation has since gone cold.

Fatima met Mohamed on his return to Tanzania in 1975. They had fallen in love and married in the early 1980s, moving to the UK to start a life here. Fatima loved music, particularly George Michael and Boy George, cooking and Bollywood films. However, her main love and devotion in life was her family. Fatima has three children and a growing number of grandchildren. Fatima was close to her family, and although she enjoyed spending time at home, she enjoyed socialising with the women at the Mosque and at work.

Fatima is a devout Muslim and always spent Friday at home completing her daily prayers, awaiting her husband’s return from work at 13:30. When Mohamed returned from work on Friday the 12th, he found is strange that she was not home. He rang family and checked the hairdressers in the local village to no avail. The police were called, arriving within 20 minutes and the investigation began. Early the next morning, helicopter searches were conducted in surrounding woodlands and cliff areas around Newhaven and Brighton. There were no signs of Fatima.

Despite continuing the investigation, Sussex Police were not able to locate Fatima or identify the route she had taken after leaving the house. But, 18 months later a possible sighting of Fatima was made. In the early evening on 7th August 2017, a woman matching Fatima’s description was seen running to catch a bus in Brighton, only nine miles from the home she disappeared from. The woman who had reported the sighting used to work with Fatima and was confident in her identification. The police pursued the lead, but they were not able to progress Fatima’s case any further.

On the 7th February 2021, Leeds Beckett University began the review of Fatima’s case which is led by student senior officers Eleanor Welton and Esther Wilkinson. There are seven other students working on Fatima’s disappearance who are thoroughly exploring all aspects of the case, hoping to find some new lines of inquiry that might move Fatima’s case forward.

Fatima Mohamed-Ali’s case is featured on our podcast, ‘The Missing’. You can listen to the episode below.