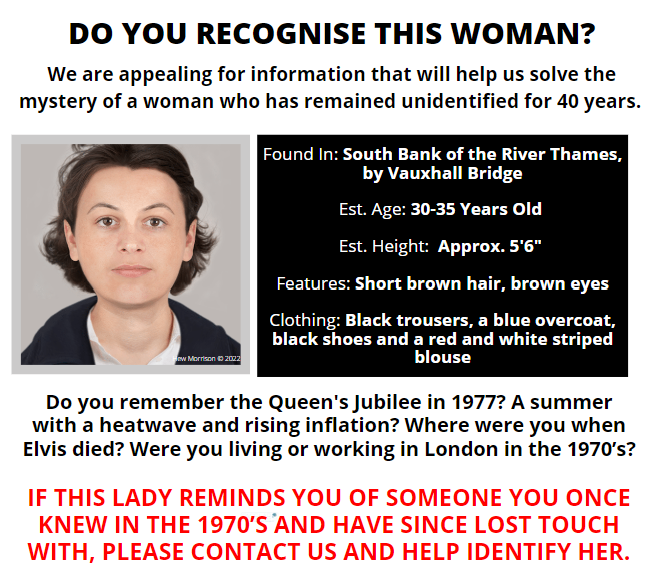 First forensic rendering of woman renews hope of identification, 45 years after body was found at the foot of Vauxhall Bridge 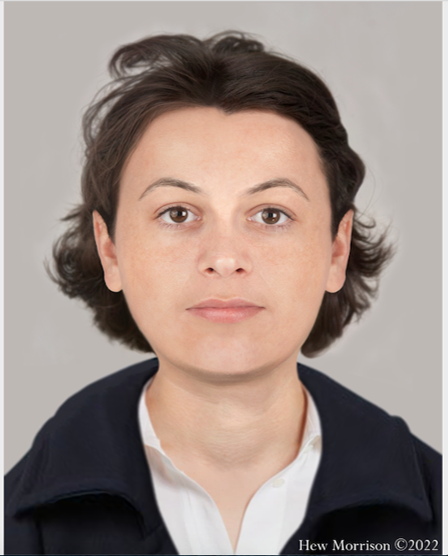 [September 28th, 2022] Locate International and renowned forensic artist Hew Morrison have released an image of an unidentified young woman whose drowned body was pulled from the River Thames on the 45th anniversary of the discovery. Morrison was able to create an artist’s impression from photos taken at the scene. The woman was discovered in the same year as the late Queen Elizabeth II’s Silver Jubilee, and the creation of the image is part of a fresh appeal for information. The charity hopes that the image will trigger memories for anyone living and working in London during that decade that may have known her.

Locate International, a charity that lends specialist assistance in searches for long-term missing and unidentified people, has been working closely with renowned forensic artist Hew Morrison, and he has crafted this compelling illustration based on the description of the body. The body was found at the bottom of the stairs leading to the south bank of the Thames by Vauxhall Bridge. An autopsy estimated her to be between 30 and 35 years old when her body was recovered, and she was 5’6” tall, with brown eyes, and short brown hair. She was also smartly dressed, found wearing black trousers, a blue overcoat, black shoes and a red and white striped blouse.

Dave Grimstead, CEO and co-founder of Locate International commented:
“The Lady in the Thames died 45 years ago and her name is key to finding out what happened to her. Many people remember where they were when they heard of Elvis Presley’s death, or what they were doing for the Queen’s Silver Jubilee, so we are hoping that this image, set within the context of that culturally significant year, will jog someone’s memory. Even if your information feels insignificant, it could be the key to solving this incredibly sad case.

“We are very grateful to Hew Morrison for his work on the image, which could provide a vital visual prompt for people who may have known this lady. This is someone’s daughter. We must keep applying the forensic techniques of the present to the cases of the past. The dedication of Hew and other forensic experts are helping us return the name people had in life and find justice where it is needed”

Her identity remains a mystery 45 years later, and the charity is releasing the image to try and jog the memories of people who worked or lived in the area during the 1970s, particularly around 1977, the year of the late Queen Elizabeth II’s Silver Jubilee, and the death of Elvis Presley. If you recognise the woman in the image, and have any information about her, you can contact us through the appeal page.